As an Air Force spouse of 22 years, Susannah Derbenwick is well-practiced in self-sacrifice, volunteerism, and managing the complicated logistics of moving her family around the globe. But she never thought that experience would be crucial in helping Ukrainian refugees escape to Romania during a devastating war.

Derbenwick has been working hard to help families impacted by Russia’s invasion of Ukraine. Her effort wasn’t necessarily planned; instead, it evolved into a makeshift mission headquartered at her home office, with her running communications networks on her international cell phone and transportation services in her exhausted minivan.

Derbenwick, a school counselor, and mother of three lives in Romania. Her husband serves as the Senior Defense Official and Defense Attache in Bucharest.  She was on vacation in Vienna late last month when news of the war in Eastern Europe broke out. It was “one of those days you feel bad for living your best life,” she said. News of the Russian invasion traveled fast through their community of friends and hit close to home—literally, in this case, with Romania sharing part of its northern border with Ukraine.

“It was really shocking and upsetting,” she said. “A lot of our Romanian friends were wondering if we needed to evacuate.” 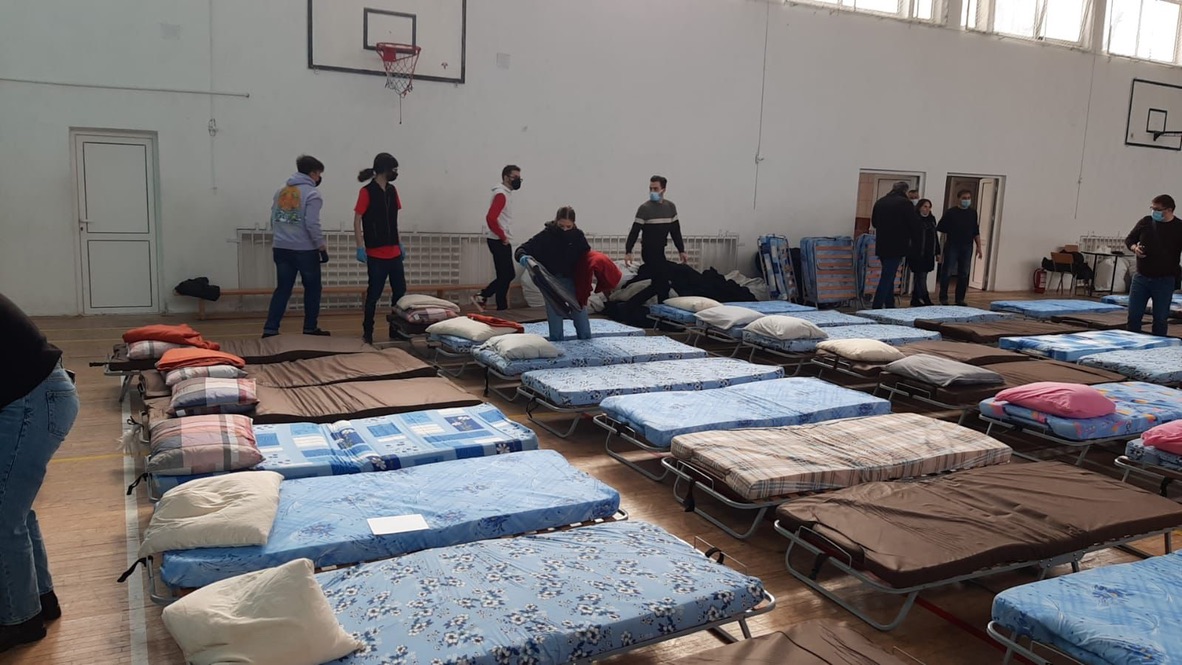 The Derbenwick children attend the American International School of Bucharest, an institution with deeply connected students worldwide, including Russia and Ukraine. It was here that Derbenwick learned how to help, and how desperately help is needed. The school community, which includes other American military families, quickly created an initiative to collect items to support refugees and supply shelters with beds, necessities, and food.

The list was extensive; hygiene products, sheets, diapers, blankets, towels, baby shoes and more. She shared the efforts on her social media accounts before bed one night, and funds came flowing in from her friends living back in the U.S. Some $2,000 was raised while she slept the first night. 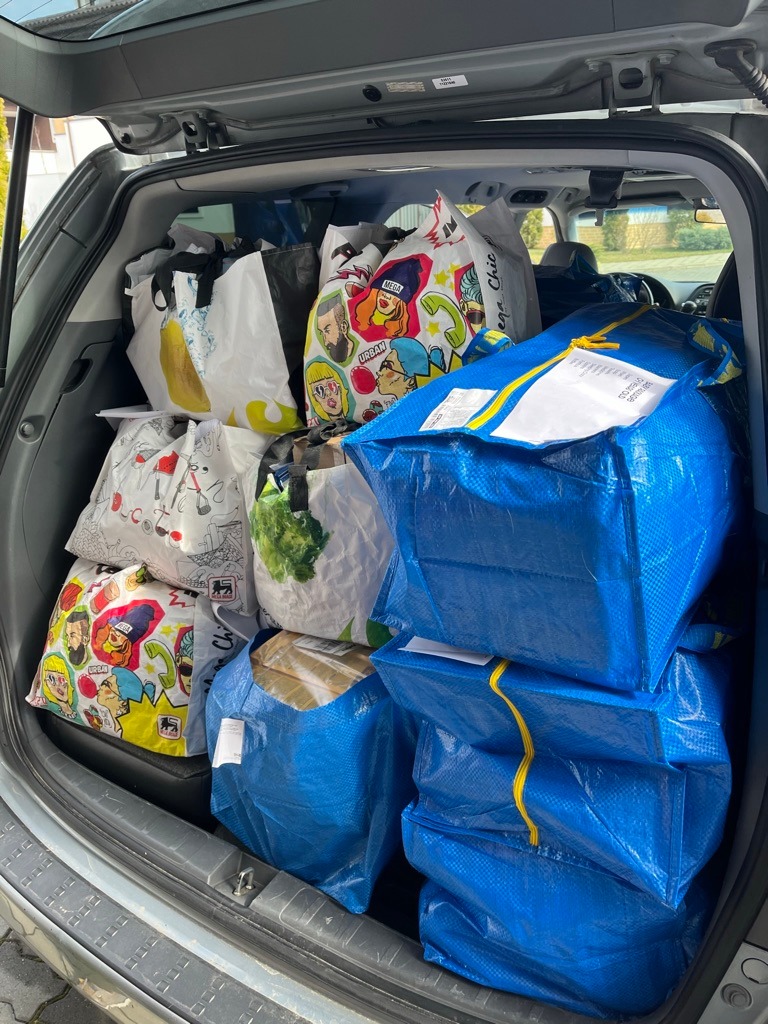 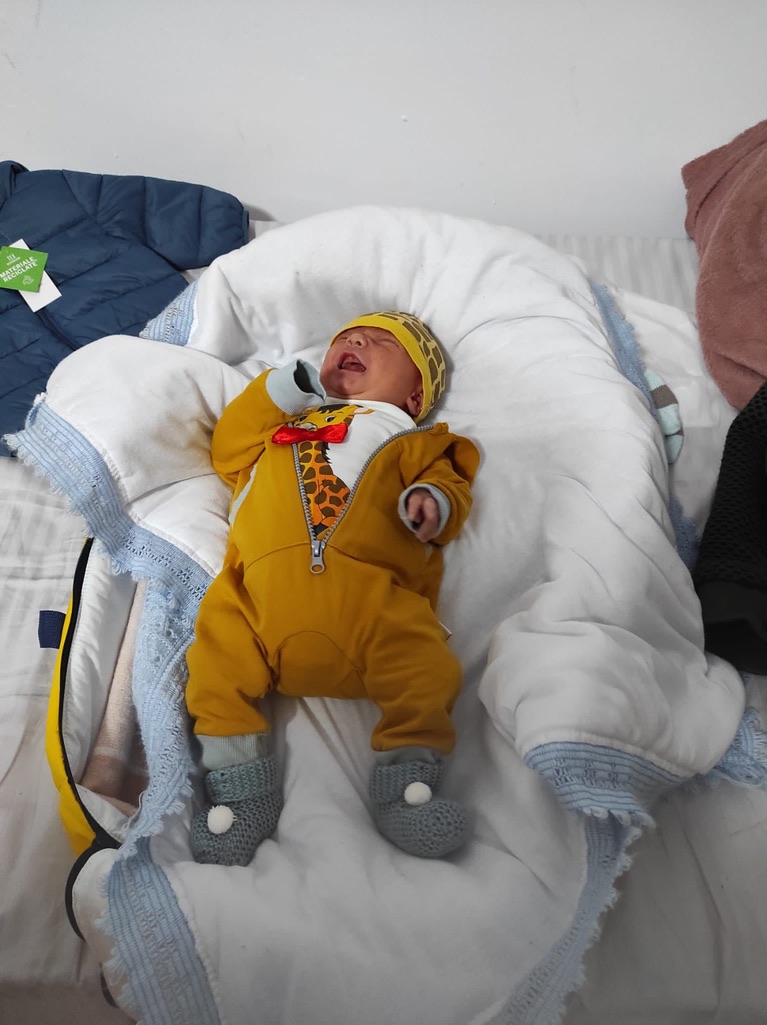 Derbenwick frantically shopped, dropped off items, and was naturally drawn to pitch in at the nearest shelter located in an old aviation dormitory.

“I stood on the sidelines and watched the volunteers and refugees,” she said. “They’ve been through a lot.”

She was overwhelmed with Romanian volunteers’ comfort, care, and compassion. She saw women and babies in the 100-bed shelter; at one point, a baby was born there. “The moms and kids break my heart. The moms try to keep things somewhat normal for their kids, but it’s just not,” she said with sadness. Derbenwick and a crew of spouses attached to the US Embassy loaded and unloaded her stuffed minivan there countless times to fuel the facility, and in that time she says she has gained more than she has given. She has a newfound perspective on the meaning of “refugee,” and realized that this conflict has engulfed people of all walks of life in Ukraine; the war doesn’t care who they are.

“It is a lot when you hear the word ‘refugee’,” she said. “Everyone has had to flee. People of all social-economic layers.”

Ukrainian refugees are fleeing to Bucharest in growing numbers. Only the country of Moldova sits to the northeast between war-torn Ukraine and Derbenwick’s current home of Romania.

“Moldova seems so vulnerable, so a lot of refugees are coming here,” she said. The nearest train station is a second location for Derbenwick’s efforts.

Volunteers have set up rooms, filled with supplies delivered by Derbenwick to welcome refugees with food, changing areas for babies, and places to sit. She picks up food from a local restaurant most days and delivers fifty hot meals to the train station. Her efforts were made possible by the support of family, friends, and perfect strangers connected on social media; to date, she’s raised $10,000.

“The generosity has blown me away,” Derbenwick said. She also says being a good steward of the donated money has been stressful. “I want to do acts of service and send back these experiences to people that are donating,” and the process has turned into full-time work with overtime shifts too.

Most recently, she was shopping at what she calls the “Romanian Target,” or Carrefour, a retailer likely well-known to those who have lived abroad. She saw two young boys and their parents looking for a suitcase. “They looked like they had been through hell,” she remembered. A conversation started immediately, it turns out the family of four refugees spoke English. Derbenwick offered to buy their suitcase. “They were in disbelief that I wanted to help them,” explained Derbenwick. The Ukrainian mother broke down into tears and started to share the story of their journey. She said their Ukrainian community had been bombed repeatedly and her family had been living in a shelter under their home. Her son has a heart condition, and every time there was an explosion, which was around the clock, her son’s heart would beat out of control. She believed the stress of the violence was going to kill him.

Desperate to keep him alive, they walked 20 kilometers to the Moldovan border, where they found transportation to Bucharest. Derbenwick bought the family some basic supplies, including a toy for each child. They each picked a baby Yoda doll to hold as they continued their journey to start a new life in Ireland.  “God put you here,” the grateful refugee told her. Derbenwick reflected upon this encounter and thought, “it’s a weird feeling. I was just listening and thought I need to spend this money in good ways.”

Derbenwick has temporarily stopped collecting funds in order to spend what she has first.  “People have been so trusting of me,” she admitted.

Derbenwick’s self-sacrifice, volunteerism, and management of complicated logistics will continue as long as Ukrainian refugees need her. “The spouses here at the US Embassy have rallied and we’ve been able to organize our efforts to really lend a large amount of support. It’s been amazing,” she said with pride.