You know this would be more fun to read if it came straight to your inbox. Subscribe here and never miss The Sip. Also be sure to add us to your address book so we don’t get caught in spam. Nobody puts Baby in the corner.

On today’s date in 1906, the first true supermarket was opened by Clarence Saunders in Memphis, Tennessee. The “Piggly Wiggly” was the first to introduce such things as shopping carts, check out stands, and individual item pricing. Dance party in Aisle 5.

At least there’s nothing controversial in the news, said no one who has seen any news this week. Pour yourself a giant glass of something (opting for a 4th cup of coffee over here) and settle in because there’s a lot to sip on today.

First up, Nike. Everybody is talking about their new ad campaign, featuring the NFL National Anthem protest starter, Colin Kaepernick. Earlier in the week, The Swoosh released a picture of his face with the words, “Believe in something. Even if it means sacrificing everything.”

Turns out the military community is just as split as the rest of the world on Nike’s decision and word choice. Taya Kyle posted her response on Facebook that quickly went viral basically saying, “Nope. Are you serious? Now I’m buying Under Armour.” (Okay, it’s far more elegant than that and worth the read). Several Gold Star spouses posted their own images of their fallen heroes with the same words, which absolutely no one can argue with.

Then came the Pat Tillman memes from every corner of the internet with the same motto across his face. In response to that, one of our favorite founders, Griff from Combat Flip Flops, went on a Facebook live to say, “The guys who knew him and served with him, it just kind of pisses us off every time every time we see stuff like this. Please stop using him to virtue signal … Just stop.” (Okay, that’s an exact quote and is worth the watch). Griff’s plea: You really want to talk about Pat, talk about his incredible foundation (which it is, and you can learn more about here). And finally, one military spouse published this response piece titled, “Don’t speak for my military family” in Salon with this line: “To the athletes taking a knee — and the team personnel and companies that support them — you are true patriots, and I thank you.”

Whether you’re burning your Nikes (and please don’t, just donate them) or getting a Swoosh tattoo, here’s the new video.

Well, I think we made it through that presenting both sides and without bias, which is how we like to roll.  One for one. Next up: The Op-Ed heard round the world. BRB. Switching from coffee to a G&T.

Yesterday, the New York Times in a rare move, published an anonymous opinion piece penned by a verified “Senior Official” in the Trump Administration that had such thoughts as, “It may be cold comfort in this chaotic era, but Americans should know that there are adults in the room … We fully recognize what is happening. And we are trying to do what’s right even when Donald Trump won’t.” The response has been hugggggeee with everything from Trump tweeting, “The Failing New York Times!” and “TREASON?” and demanding the person be turned over, to a million other opinion pieces of how we didn’t elect a shadow government and the author and everyone who agrees with him/her should simply quit, and a thousand other things. There’s no saving the drama for your mama, today. Sorry kids.

Other things in the world: there’s a mysterious leak at the International Space Station that we bet a Space Force would fix. Fantasy football, college football and the NFL season is getting underway, interrupting marriages everywhere until forced fun at unit holiday parties.

And finally, because everyone needs a win and we’re out of limes for a second drink, Amazon founder Jeff Bezos and his wife made their first major political contribution and you have to hear about it. They wrote a big old check for $10 million to the With Honor Fund, a super-pac dedicated to getting veterans willing to work across the political aisles elected. Can we get that in 2 business days please?

A Florida man was arrested for giving his girlfriend a wet willy. Yep.

An “infuriated” New York Knicks fan sold his fan allegiance on eBay to the highest bidder, for $3,500 (!!!!), proving that there really is a lid for every pot on the internet. And a new Lakers fan.

And our favorite: A Texas student who noticed a blank wall at his local McDonald’s and wanted to see more Asian representation in advertising made a supersized poster starring himself and a friend and hung it up, where it has gone unnoticed for MONTHS until he revealed it on Twitter. McAmazing.

This piece over in Military Spouse about daycare raising her kids has generated plenty of controversy and plenty of well-earned praise for the CDCs.

Loving this post from Mamas and Coffee about now that school is back in session, the importance of doing something for yourself.

And, don’t miss this excellent entry in the Millie Journal by Kellie Artis about what a seat at the table really looks like. 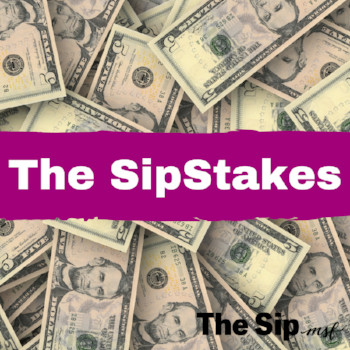 The winning has started and it is only going to KEEP going!!! Our second SipStakes winner ($200 Amazon gift card!) is … Amanda H.! A gift card is coming your way – we’ll email you. Thanks for entering! (Also, Juan from Tuesday – email us back to claim your prize!)

For the rest of you, you still have 19 chances to win. Keep sharing, keep entering, keep being awesome. Enter here, and then share, share, share! Every single time one of your buddies signs up, you’re entered. 10 buddies = 10 entries. The SipStakes: because informed and winning looks good on you. And the link one more time for the people in the back:  www.milspousefest.com/sipstakes

Win in Person – Join Us!

If you like winning on the internet, imagine the feels of winning IRL. Join us for a MilSpouseFest and do just that! From awesome speakers, great opportunities to network with other super fun spouses and kick booty prizes, don’t miss MSF. Learn more and register here.
Like what you’re seeing? Why not get this goodness straight to your inbox? Subscribe here.

Spread the love
The Sip