It’s Tuesday, which means it’s time to stock up on tacos and your news from The Sip, the bi-weekly newsletter brought to you by the team at MilitaryOneClick and MilSpouseFest.

On this date in 1963, Soviet Valentina Tereshkova became the first woman in space. Reach for the stars.

While we’re talking about the cosmos, President Trump directed the Department of Defense yesterday to create a sixth branch of the armed forces: a Space Force. In his remarks, President Trump stated, “It is not enough to merely have an American presence in space. We must have American dominance in space … We are going to have the Air Force, and we are going to have the Space Force, separate but equal.” And of course, with this news, the best of the internet showed up, with delights like, 7 Important Suggestions for the Future Space Force Slogan. Our favorite? Join the Space Force: We’re like the Airborne, but better because we’re in space.

Speaking of a force, a California couple raised over 3 million dollars in less than three days in support of the Refugee and Immigrant Center for Education and Legal Services (RAICES), a nonprofit located in Texas that offers free and low-cost legal services to immigrants and refugees. Over 78,000 people donated to the fundraiser on Facebook, with as much as $4,000/per minute rolling in.

Why the fundraiser? A new “zero tolerance” immigration policy at the southern border that everyone is talking about. Breaking it down: Attorney General Jeff Sessions announced early last month that, “The Department of Homeland Security is now referring 100 percent of illegal Southwest Border crossings to the Department of Justice for prosecution.” So why are families being separated? Because kids can’t be sent to criminal custody.

When parents are held to await their federal court date weeks and sometimes months later, children are taken to a different facility. And if the parent is found guilty, they can be deported without their children. The kids are then treated as “unaccompanied minors,” and the government works to identify a relative already in the States or the child can be placed in foster care. DHS reported that from April 18 to May 31 of this year, 1,995 children were taken from 1,940 adults, prompting cries for a policy change from both sides of the aisle, including all four living First Ladies.

We are loving this piece from Birdie and Bubba about what she wishes she knew when she moved away from home. Our favorite? Don’t buy expensive furniture.

Don’t miss this awesome post over on And Then We Laughed about Oprah, putting it out there, and opportunities from left field.

What could go wrong with a military widow bachelorette as the premise of a reality show? Let Amy Bushatz tell you in this great piece over on SpouseBuzz.

Already have kids telling you they’re so bored during this second week of summer? Check out these 21 awesome science experiments from MilKids.

Meme of the Week

From our friends at Martinsburg College: 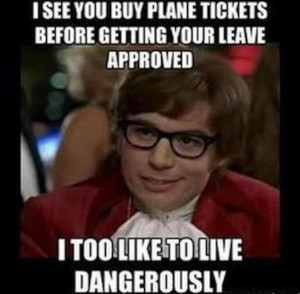 We LOVE homecomings, and it’s even better when the tables are turned and the spouse is the one pulling off the big surprise! Watch this incredible Fleet Week moment on The Today Show.

Loving the Sip? Moving us to Spam? Tell us what you want to see more of or you could do without. We love your honest feedback. Email us at TheSip@milspousefest.com.

Never miss The Sip! Subscribe here if you aren’t getting this goodness already.

One Reply to “The Sip: May the Space Force be with you”