Get this awesome in your inbox! Subscribe to The Sip by clicking here.

Today in 1977, Elvis Presley performed his last concert. Whether you have blue suede shoes or prefer to be barefoot, a dance party is definitely in order today. Alexa, play The King.

Meme of the Week 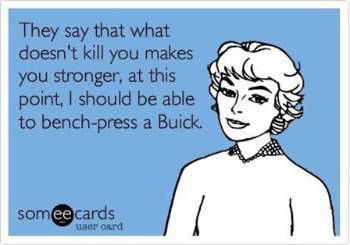 Immigration is in the news again, and this time it might hit even closer to home. Homeland Security will be asking the Pentagon to approve plans for more than 7,000 unaccompanied children to be housed at Goodfellow Air Force Base in San Angelo, Texas, and approximately 4,000 more migrant families across the way at Fort Bliss. We certainly can’t think of two better named bases to take in these children. When asked about the policy Secretary Mattis replied, “We have housed refugees. We have housed people thrown out of their homes by earthquakes and hurricanes. We do whatever is in the best interest of our country.”

Someone else who has done whatever he can for our country? Ninety eight year old Army veteran Capt. Martin Gelb, who received the Congressional Gold Medal yesterday for his service behind enemy lines in World War II. Capt. Gelb was one of only a few Jewish officers who served in the Office of Strategic Services, the precursor to the Central Intelligence Agency. He was a field radio officer in Nazi Germany, and didn’t tell his family of his involvement until it was declassified in 2008.

Also a long time coming, the Navy has updated their parental leave program as part of their Sailor 2025 program. Alongside 44 other initiatives according to the Navy, Sailor 2025 seeks to remove obstacles that negatively influence a Sailor’s decision to stay Navy when they are looking to start or raise a family.

This piece by Erica McMannes of MadSkills over at Military Spouse is one of the best things we’ve read this year, trying to shut down one of the most popular phrases said in the civilian world: You Knew What You Were Getting Yourself Into (#YKWYWGYI).

Something we definitely didn’t think we’d be getting into? Job discrimination. And yet, it totally exists. Read this great article by The Motivated Millenial about how to get past the rejection letters and create your own opportunities.

Finally, need a dose of the great outdoors? Take your crew camping, and read this awesome post on Poppin Smoke with tips you need to know about military campgrounds before you go.

We don’t take political sides at The Sip, but we are all for more veterans and spouses running for office. M.J. Hegar is an Air Force veteran whose helicopter was shot down over Afghanistan while flying a Combat Search and Rescue mission. Her campaign ad “Doors” went viral for being just as inspiring as she is. Watch it here.

[Sponsored] Are You an Entrepreneur?

You could win $25,000 and mentoring from world-renowned businessman and Shark, Daymond John. Only 1 day left to apply at www.ourfarmsalutes.com

Shopping While We Sip

Head on over to Macys.com and donate $3 to get 25% off a purchase. 100% of your donation benefits Blue Star Families, Bunker Labs and Team Rubicon. Click here to learn more about The Big Give Back.

We love your feedback! Whether you’re hitting forward or delete, we want to know. Email us at milspousefest@gmail.com and tell us how you really feel.